As I looked for pictures to put on our Christmas card this year, I realized that we don’t have many family pictures of the three of us – I couldn’t find a single picture from the entire year!  With time ticking away to get the cards created and mailed, I checked my phone’s camera roll from our trip to Disney World in November hoping to find something usable.  My affinity for selfies finally paid off — I found a few great pics from some of our favorite places in Disney World!

So from our family to yours, MERRY CHRISTMAS!

In case you’re wondering, here’s where our pics were taken:

5. Roof of Contemporary Resort outside of California Grill

A few weeks ago we attended Mickey’s Very Merry Christmas Party at Magic Kingdom.  It was my first time attending and I really didn’t know what to expect.  Before buying the extra ticket necessary to attend the event, I didn’t even do much research – I just trusted that it was going to be fun because there’s so much buzz that surrounds the event every year.  Then, $200 later, I started to wonder about the event – what happens there? how’s it different from the regular Christmas festivities? How do they make sure that people without the extra ticket leave the parks?  So instead of going on and on about everything we experienced at MVMCP, I decided to write this post in a Q & A format with some of the questions I was asking myself.

How is Mickey’s Very Merry Christmas Party different from the regular Christmas festivities at Magic Kingdom?
MVMCP is a special event that requires purchase of an extra ticket.  The event is held on specific nights in November and December and runs from 7pm – midnight.

What makes the Christmas party unique are the special events that are held such as Mickey’s Once Upon A Christmastime Parade, Celebrate the Season stage show, SNOW on Main Street, Holiday Wishes fireworks and FREE cookies and hot cocoa!

Goofy in the Once Upon A Christmastime Parade

Santa joined Mickey in the parade

These event are all exclusively for the party and as always, Disney doesn’t cut any corners – they are just as good, if not better, than the parades and shows during the day.  It seemed weird to be getting something for free but I must say it was nice to walk up to the counter and be handed 2 cookies and a cup of hot cocoa at any of the treat stations.  On the night we were there the cookies were snickerdoodles, but I’ve heard that they sometimes serve chocolate chip cookies too.

How do you know where to get the free cookies and hot cocoa?
I had read about the free treats and was very concerned about not knowing where to go to get them.  I wondered if there would be one treat station way in the back of the park, but to my delight there were 7 different stations throughout the park!  Luckily they were very easy to spot because they were marked with giant inflatable light-up candy canes.  They were also marked on the special park map created just for MVMCP (also very handy for keeping track of what time each event was happening.) 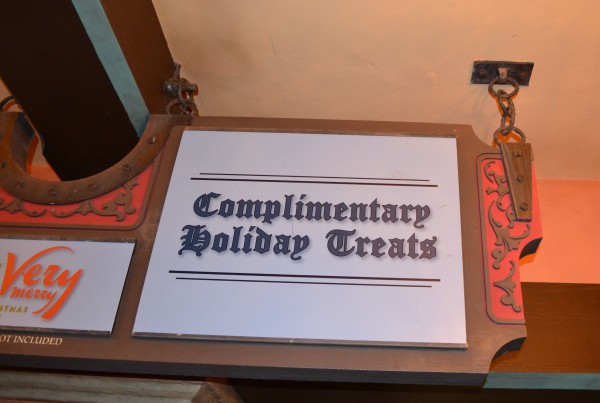 How does it work with the extra ticket that I purchased for the party? And how do they get people without the extra ticket out of the parks?
A few days after we purchased our tickets they arrived in the mail.  I was a little disappointed because they were on regular park ticket cards without any Christmas decor!

On the day of the party I brought the tickets with us to the park, unsure of what exactly we had to do with them.

We were waiting in line for Splash Mountain around 5:30pm and a cast member asked if we were staying for the party.  He let us know that we could go to one of the spots that were set up to check in and get our special bracelet for the party.  We went to the spot and found that we didn’t even need the cards we got in the mail because the tickets were loaded onto our MagicBands!  We scanned our MagicBands and were issued a bracelet.

I had wondered how they were going to evacuate the people who didn’t have tickets to the party.  Right around 7pm,  cast members started patrolling the entrances to each land asking (or more like shouting at) everyone to show their bracelets as they walked by.  I didn’t see them stop anyone who didn’t have a bracelet and it seemed fairly easy to get by if you really wanted to, but knowing Disney I’m sure they have ways to remove the uninvited guests.

Is it super crowded?
I thought the crowd was very reasonable (although the night we attended was not sold out.) We were able to watch the show in front of Cinderella Castle from the section right in front of the stage.  We never had to wait in a line to get our cookies and we rode the Seven Dwarfs Mine Train with just a 25 minute wait (the wait the rest of the day was 90+ minutes.)  We did go to one of the first party dates in late November so I imagine that as it gets closer to Christmas the crowds in general will be bigger and the parties might be more crowded.

Celebrating the Season up close with Mickey and Minnie

Is it worth the money?
I think it was worth the money to attend the party.  Just like a nice table service meal or behind the scenes tour, it’s another Disney experience that we can say we did.  I’d say it’s best for older kids because of the timing – I wouldn’t want to pay for a kid who is going to fall asleep halfway through.  Overall, I’d give Mickey’s Very Merry Christmas Party two thumbs up!

Hopefully I’ve answered all your questions – if not, drop me a comment below!

Anyone who has seen Star Wars can probably agree that lightsabers are cool.  When you add in Jedi skills, an Obi-Wan robe and a chance to defeat the Dark Side, you’ve got a pretty big adventure waiting at the Jedi Training Academy at Disney’s Hollywood Studios! 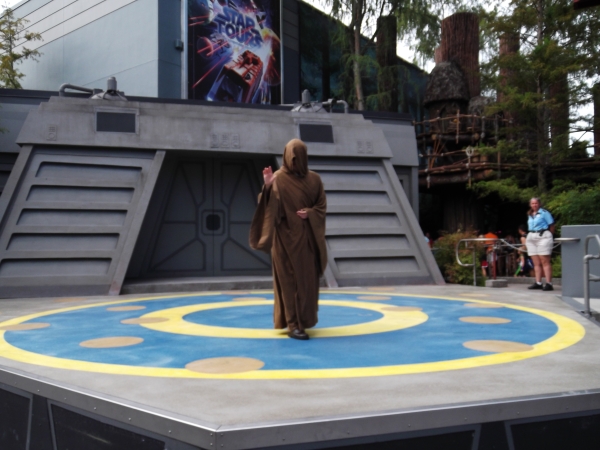 This high-demand event is only for kids ages 4-12, although I’m sure there are plenty of grown ups who would love to become Jedis too!  There are shows about every 1/2 hour throughout the day, but spots fill up quick – and the kids who are signing up have to be present to register. So if Jedi Training is on the ‘must-do’ list for your Disney vacation, plan to be at the park before it opens to head straight to the ABC Sound Studio to register.
END_OF_DOCUMENT_TOKEN_TO_BE_REPLACED

On our recent trip to Disney World, we visited Epcot just a few days before the official start of the 2014 Epcot International Flower and Garden Festival.  I didn’t think we’d get to see any of the displays but I was excited to discover that we were able to view a lot of the amazing topiaries (although some were partially hidden until the official festival opening date.)  We were at Epcot for the Flower and Garden Festival a few years ago (here are some photos from that visit) and I thought a lot of the displays would be the same but I was wrong – there were so many characters that we hadn’t seen before! 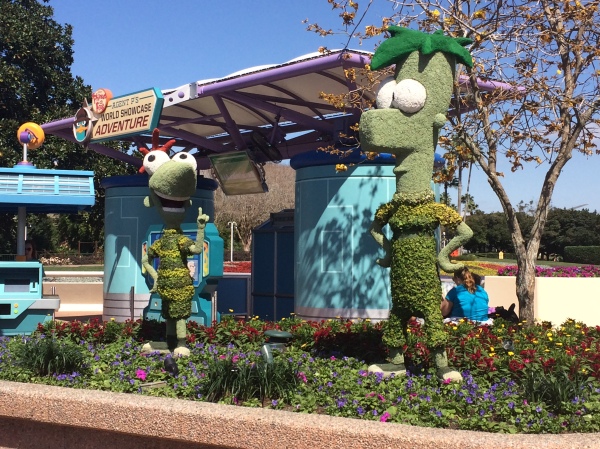 Here’s a hidden one – I just stuck my phone through the bushes and took a pic: END_OF_DOCUMENT_TOKEN_TO_BE_REPLACED

Holidays Around the World at Epcot

One of my favorite Christmas holiday features at Disney World is the ‘Holidays Around the World’ at the World Showcase in Epcot.  I didn’t expect it when we went during Christmastime so it was quite an exciting surprise.  In college I majored in International Business and French, so I’ve always had an interest in other cultures and I think that is probably why Epcot is my favorite park (along with the food and drinks!)  So when I saw that each pavilion in the World Showcase had a short performance about that country’s holiday traditions, I wanted to see them all!  Unfortunately, we didn’t make it to the performance in every country because of the scheduling, but the ones we saw were perfect for getting in the Christmas spirit!  For a listing of the different holidays-around-the-world events, check out Disney’s website here.

In Germany, Helga tells a Christmas story about her first nutcracker, which *spoiler alert* comes to life during the show! 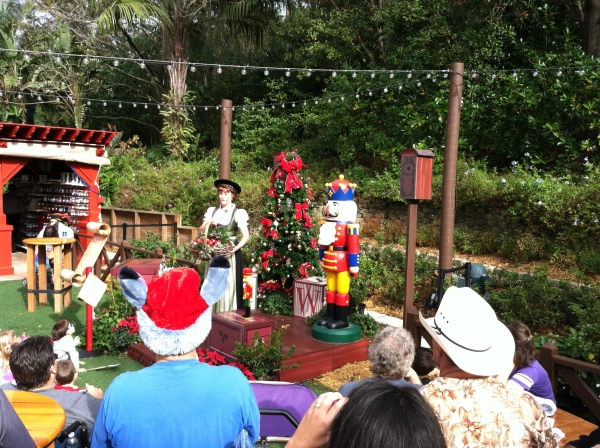 Holiday story with Helga in Germany pavilion at Epcot

Holiday story with Helga in Germany pavilion at Epcot

In Norway, there was a completely amazing performance that we came back to see a second time!  It’s the story of Sigrid and the Mischievous Christmas Gnome, Julenissen.
END_OF_DOCUMENT_TOKEN_TO_BE_REPLACED