In November 2012, my husband and I went to Disneyworld to celebrate our anniversary.  We wanted to take the opportunity to experience something that we can’t do when our daughter is with us, so after some research on the Disney website I found the perfect activity – a Segway tour!

*Note: as of earlier this year, it looks like the tour has been cancelled.  Hopefully they’ll bring it back someday, because as you’ll read below it was awesome!

I was both excited but hesitant, since the last time I was on a motorized vehicle by myself was Spring Break ’00 when I crashed a moped into a fence in a parking lot in the Bahamas.  I feel I have to explain the crash – it wasn’t as easy as it looked!  The handlebars on the moped controlled the speed, so once I got nervous and started gripping the handles it caused me to speed up and I lost control, flew over a curb and crashed directly into a fence.  After paying $200 in damages, tending to a bruised arm (not to mention my wounded pride) it’s no wonder I waited over a decade to try something like it again!  I was hoping I would fare better on my Segway experience.

The tour took place in Epcot and was scheduled for three hours.  We met at the guest relations building and our tour began at 9am.  The group of about 15 people was escorted over to the Innoventions building where the first hour was spent in a combination classroom/hands-on training session to learn the workings of the Segway as well as practicing on the indoor course.  We learned mounting and dismounting, speed control, maneuvering around cones and how to ride up and down inclined surfaces. 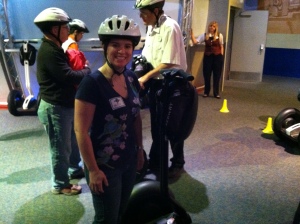 After our training session, everyone was anxious to get on the road and try the real thing.   The tour included breakfast, so the first part of our ride was over to The Land pavilion.  We rolled through a side door that lead into an alleyway with a backdoor entrance to the Sunshine Seasons restaurant.  It was odd to see the back alley since it’s something that is so carefully hidden from guests at Disneyworld.   We had picked our breakfast when we signed in before the tour so once we were seated at the tables, which were reserved just for us in a quiet area of the restaurant, our food was served within a few minutes.  After breakfast the tour was ready to begin!

Parking behind The Land pavilion

You might think it sounds kind of dangerous to have 15 inexperienced Segway riders speeding through the crowds at Epcot, but like everything else at Disney, it was completely well organized to keep everyone in check.  Cruising in a single file line, we had a tour guide in the front who spoke to us through earpieces that we each had that hooked around one ear.  Our in-class instructor pulled up the rear shouting ‘Ducks in a row!’ when anyone got out of line.

We learned about countries in the World Showcase and how the pavilions were chosen for Epcot.   We learned a few cool tidbits of insider knowledge – the pillars and façade in front of Italy were built from a photo slide and when it was created, the slide was backwards so everything is transposed from the real thing!  Another interesting fact is that if you look across the lagoon at Morocco (you have to be in one exact spot close to the ferry dock), one of the buildings in the pavilion is actually the Tower of Terror!  They painted it to match exactly and you’d never know it was even there because it blends in so perfectly.

Once we maneuvered back and forth through Italy’s pillars the guides set up a coned off area for us to freestyle.  After free time was over, we moved on to Japan for our next obstacle.  Rolling up and down the narrow inclined path around the coy pond and ducking below a tree branch may look easy… well, easy for me, hard for my 6’3” husband!  The tour guide was a lot of fun and he showed us the pavilions in a new way. 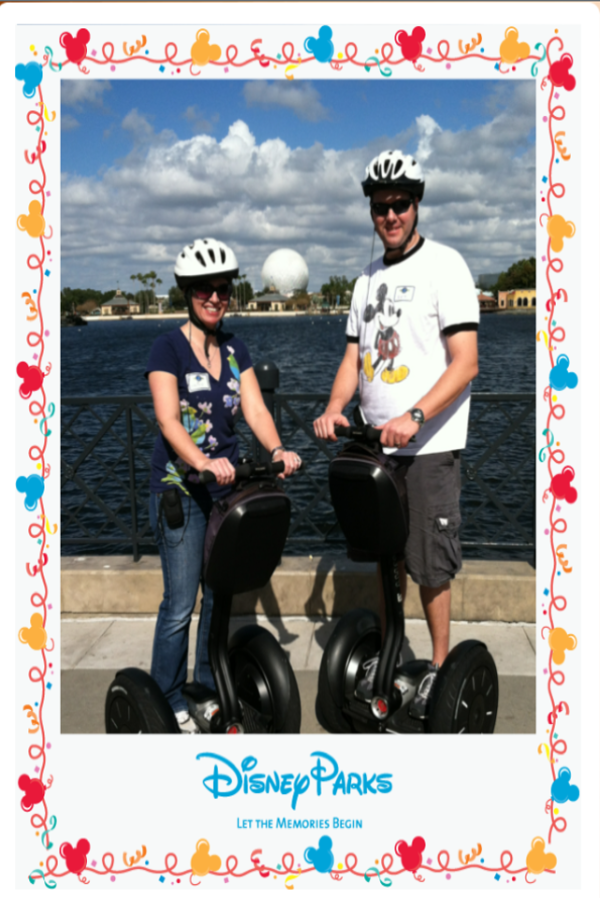 Overall the tour was one of my favorite experiences at Disneyworld to date.  Like I mentioned earlier, it’s cancelled as of now, but there is a Segway tour offered at the Wilderness Lodge which I may need to check out at some point.  One of the fun things about going back to Disneyworld time after time is that there’s always something new to learn, see, or do in the bubble!

Lines you WANT to wait in at Disney