Holidays at Disney (Scary – and I’m not talking Halloween!)

When I first heard about the Monstrous Summer All Nighter, I had a little itch to go.  I’m always looking for a reason to go to Disneyworld and what better reason than 24 straight hours of fun! Sadly, I didn’t attend the all nighter – I was probably home in bed by 10pm when the fun was just gearing up (okay – I was watching the live stream online!!)  But that’s not the point.  Why didn’t I make the trip?  It wasn’t because I couldn’t get there – I actually found a really good deal on flights.  It wasn’t because of ticket prices – I have an annual pass.  So with a cheap flight and a free ticket, what would keep me from going?? A holiday weekend!!  The all nighter was scheduled for Memorial Day weekend.  Deal breaker.

I’ve been to Disney on two separate holidays over the past 6 months:

With the experiences of back to back holiday trips fresh in my mind, I decided it’s just not worth it to go during any holiday where a large part of the general population is off work! In case you’re not convinced, let me enlighten you with a few details.

Let’s start with New Year’s Eve. Of course the parks will be crowded. Everyone knows this.  I guess my idea of crowded was longer-than-usual lines and a little more weaving through the crowd – but it would be worth it to celebrate the new year with Disney fireworks in the background as I joyfully kissed my husband at the stroke of midnight, right?!  I rarely admit something like this, but I was WRONG! It was not nearly as romantic or magical as I had imagined.  I should have known on Day 1 of our trip when we went to Disneyland and were not let in because the park was at capacity.  We were told to return around 5pm and there ‘might’ be room after the parades when people exit the park. Lines for the most popular rides, normally a 60 or 90 minute wait were upwards of 340 minutes!!!! 5 hours? Really?

The next sign that something was different was when people starting laying in the streets – it felt like I was at a concert with people getting their spot for the show.

As it got later, the crowd got thicker and it felt like there wasn’t enough air for everyone! (Maybe that’s my claustrophobia talking or just the fact that I’m shorter than everyone and couldn’t see anything but bodies!)  It got to the point where strangers around me were touching me on all sides, my legs and feet getting hit with stroller wheels and we were literally moving like a herd of cattle. I felt some minor panic until I got to an opening.  I’ll say it wasn’t too magical for me.  This picture looks like the crowd is watching something but we’re not – that’s how we were walking. MOOOOOO!

We ended up leaving before midnight and I was glad when we finally made it to the exit (I know, blasphemy!) 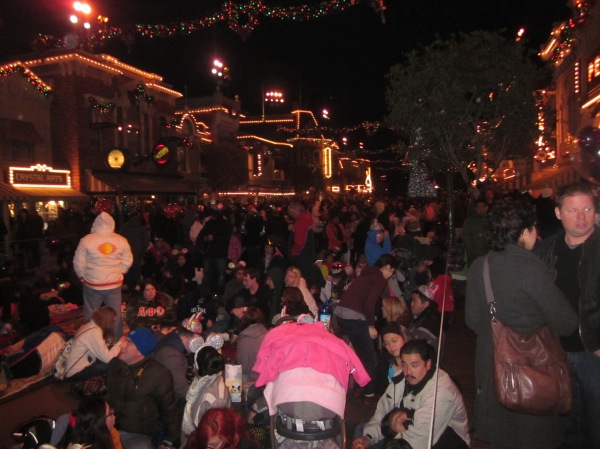 Camping out on Main Street at Disneyland- NY Eve 2012

For my father in law, who was in a motorized scooter, things were frustrating to say the least. He really couldn’t move anywhere because of the crowd so he remained parked along the side a lot of the time.  Not how I envisioned starting the new year!

The following day, New Year’s Day, was much less crowded and we got to enjoy California Adventure.  I was still a little traumatized from the night before, but I loved seeing Mickey’s Fun Wheel and things started to feel a little more relaxed.

That was an extreme example of a holiday at Disney.  But even for a much less notable holiday, things were still pretty crowded.  For President’s Day, the lines weren’t quite as long but they were longer than I’m used to and since we were only there for a long weekend it felt magnified because we wanted to fit everything in. The mistake we made for that weekend was thinking that we would be able to come in and wing it and get on all the rides we wanted – we should have known better! So we ended up walking around but not riding a lot which was disappointing.  Factor in that it was only about 40 degrees and it was even more of a bummer – uh, oh, discontent in the bubble – how could this be? This was a first.  On both of these trips the care-free, relaxed vibe that is the essence of why I love going to Disney was diminished.

So on the heels of that visit, I decided to pass on the Monstrous All Nighter. For all the money that goes into a trip to Disney why waste it when you can’t get to go on your favorite rides!?

That’s not to say you can never go around holidays – we went the week after Thanksgiving and saw all the amazing Christmas lights, shows, and attractions and it was just about the closest it was like a ghost town in the parks! What a difference a few weeks can make!  From now on I’ll spend my holidays at home and plan to pick ‘ordinary days’ to stay in the bubble!

Enjoying the rain at Disney World

2 thoughts on “Holidays at Disney (Scary – and I’m not talking Halloween!)”