The Cheapest Souvenirs at Disney World (less than $1!)

In a place as well known for being expensive as it is for Mickey Mouse, it’s easy to spend a fortune on souvenirs at Disney World.  I’ve read lots of articles on strategies for saving money on souvenirs, such as buying items outside of the parks, giving each child (or adult) an allowance that they can spend however they want, and waiting until the last day to purchase all souvenirs so that the items don’t add up to a huge expense a little at a time over the course of the week.

After visiting the parks many times, it’s easier for us to cut back on souvenirs, but even so we probably spent $75 on the last trip.  My husband got a new visor and (several) Minnie’s Bakeshop cookies to bring home and I got a scarf plus a few antenna toppers.  My daughter’s tastes are a little less expensive.  We gave her a $50 gift card to spend however she liked and it was split between pins for her pin trading and Goofy’s cherry sour balls (those are addictive!)

We’ve discovered one souvenir my daughter always looks forward to getting and it’s something she is able to afford with her own money on every single trip.  It’s the cheapest souvenir around: pressed pennies.  These charming little keepsakes cost only fifty cents plus the penny used to create it.  Leading up to our trip, she collected loose change in a jar to stock up for vacation.  A few years back, we bought her a tri-fold book to display them which was a great purchase – otherwise, like all pennies, they would end up everywhere and would most certainly get lost before we even made it home. 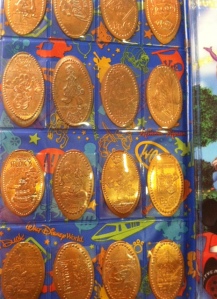 There are several fun aspects to collecting pressed pennies: 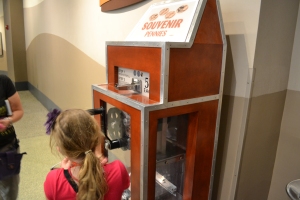 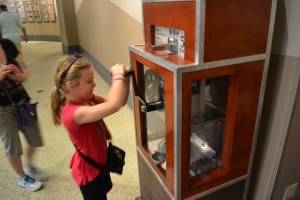 When I talk to people about Disney World, I always say that it’s worth every penny – – in this case a penny is a better reminder of our vacation memories than an empty bag of Goofy’s sour balls could ever be!!

Deciding which Disney resort is right for you

One thought on “The Cheapest Souvenirs at Disney World (less than $1!)”